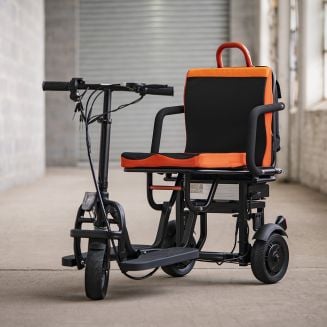 From being used in retirement homes and hospitals to private dwellings, dozens and dozens of wheelchairs—packed with countless customizable features and configurations – give the gift of mobility to disabled and impaired individuals worldwide. Needless to say, with the introduction of folding power wheelchairs, the industry has come a long way.

Before getting to the nitty-gritty, let’s pay some attention to the fascinating history of wheelchairs, including the several phases of development and fine-tuning that led from manual wheelchairs to electric power wheelchairs—used by millions of disabled individuals today. Stay with us until the end to discover the best folding power wheelchairs. Without further ado, let’s hop in.

A groundbreaking device that has been available for many decades, power wheelchairs may tremendously benefit individuals with impairments or limited mobility. Surprisingly, the invention of the first power wheelchair encouraged more manufacturers to develop an improved version, adaptable to various mobility circumstances and difficulties encountered on the road. To bring you up to speed on the past, present, and future of the motorized wheelchair, here’s an overview.

According to the historical records on wheelchairs, George Klein, born in Hamilton, Canada, is recognized for having contributed to the design and invention of what is regarded as the first electric or powered wheelchair. Other inventors were motivated to produce new, groundbreaking innovations due to his inventions and often turned to Klein’s designs for inspiration.

Klien spent most of his childhood working at the jewelry business owned by his father. There, he fiddled with various goods and was fascinated by the workings of timepieces. As he got older, his interest in mechanical devices became more established, which forced him to find answers to day-to-day difficulties. Even though Klein didn’t do so well in school, he became one of Canada’s most renowned and successful innovators of the 20th century, whose influence was witnessed for decades.

As time passed, Klien finally managed to get accepted at the University of Toronto, which laid the groundwork for his subsequent career as the designer of a robust electric wheelchair that revolutionized how impaired individuals moved around. Along with a group of other engineers working at the National Research Council of Canada in 1929, Klein was responsible for developing the first electric-powered wheelchair, sometimes referred to as “The Klein Chair.”

After World War II, Klein and his colleagues focused their early efforts on developing a design for an electric wheelchair to assist veterans. According to the University of Toronto, Klein spent over 40 years at the National Research Council of Canada. During his career, he was responsible for developing several useful mobility gadgets. However, Klein’s most famous invention to date is still an electric wheelchair designed specifically for individuals with quadriplegia.

Moving forward, Klein worked on incorporating the joystick into his invention. Additionally, he worked to separate the wheel drives and make the turning components more acute. The following is a quick rundown of the history of the wheelchair as well as the many phases of development and fine-tuning that led from the manual wheelchair to the electric wheelchair:

It all started in 1595 when a wheelchair was invented for King Phillip II of Spain, who was paralyzed from the waist down. As time passed, a paraplegic watchmaker named Stephen Farfler created the first self-propelled chair on a three-wheel platform in 1655. Later in 1783, a man from Bath, England, named John Dawson, constructed a wheelchair. However, the first wheelchair design to be granted a patent in 1869 had tiny casters at the front and larger wheels in the rear of the device.

Between 1867 and 1875, several innovators developed rubber wheels similar to those seen on bicycles. However, in 1881, pushrims, which allowed wheelchairs to propel themselves, were introduced to the market. Later in 1916, the first motorized power wheelchair was introduced. In 1932, Harry Jennings created the first folding tubular wheelchair. Everest & Jennings began producing electric wheelchairs in 1956, not long after they came up with the idea for the folding wheelchair.

Based in NY, United States, 1800Wheelchair is a company that needs no introduction. Founded with a mission to fill a void in the mobility equipment market, 1800Wheelchair offers more than 1,200 products in 100 categories—guided by four exemplary principles: value, convenience, timely delivery, and expert advice. Since its launch, we have served over 1 million customers worldwide, making us a leader in the folding power wheelchair market. All products are backed by Bread®.

The Feather Power Chair is just 33 pounds, making it the lightest electric power wheelchair on the market. If that’s not enough to pique your interest, we don’t know what else is. This wheelchair can be folded into a tiny package in ONE PIECE, collapsing the seat to 13″ and the back folding down to 28″—ideal for fitting into any vehicle or storage closet. Technically speaking, with 4-mph speed and one single battery charge, you can travel 13 miles with Featherweight 33 lbs. Power Chair.

After the Feather Power Chair comes this All-New Move Lite, another lightest mobility chair on our list, weighing only 50 lbs. The Move Lite can be folded into ONE piece without disassembly, allowing it to fit in most automobiles’ trunks easily. This gives you the flexibility to go shopping, to the park, and do the activities you like. The durable, lightweight aircraft quality aluminum makes this model extremely durable, while 12″ flat free rear tires allow it to roll over rough terrain.

When it comes to a compact power chair, the eVolt Traveler Power Chair ticks all the boxes with its two super strong 250W motors for a combining 500W motor. Apart from its powerful composition, the eVolt Traveler holds a tight space, allowing it to fit into any vehicle. Additionally, this wheelchair boasts a weight of only 48 lbs., making it lighter than All-New Move Lite but heavier than Feather Power Chair. Nevertheless, this powerful wheelchair is hands down the best bang for your buck.

Model H Hybrid Manual and Power Chair in One

When it comes to utilizing multi-features, the Model H Hybrid Manual and Power Chair in One set a high standard in the wheelchair market. Weighting only 39 lbs., this hybrid model allows you to self-propel and switch to power mode at any time. With a set of additional elements that do not come with most power wheelchairs, including removable seat and back cover, adjustable anti-tippers upgrade, batteries (12V and 6V), and charger, Model H leads the market one more time.

This Pride Portable Jazzy Elite ES equips a small turning radius and stability, provided by the in-line technology included in this power wheelchair. Your ride will be more comfortable—thanks to the higher back of the seat, which also includes a headrest and a bigger footplate. This power chair is more dependable than other power wheelchairs due to its easy-to-maintain structure and the addition of the Jazzy Armor, which increases the chair’s resistance to typical wear and tear.

The Future of Wheelchairs

When it comes to folding power wheelchairs, we have come a long way since the 20th century. All in all, the history of wheelchairs has resulted in several significant improvements and innovations, which in turn have inspired a wave of technologically sophisticated wheelchairs. Even better, the most recent and cutting-edge technological advances may also turn any ordinary wheelchair into a smart one—with the power of AI, machine learning, big data analysis, and cloud connection.

So there you have it: the best folding power wheelchairs. At 1800Wheelchairs, we understand how overwhelming it might be to track down a transportable motorized power wheelchair that folds into one piece. However, the wheelchairs mentioned above, with their lightweight structure and composition, are the best currently on the market and definitely won’t break your bank.

Finally, we introduced you to some of the best folding power wheelchairs available at 1800Wheelchairs. This brings us to the end of this guide; now, it’s time to hear from you. Any questions? Or maybe there’s something we missed? Either way, feel free to leave a comment below.